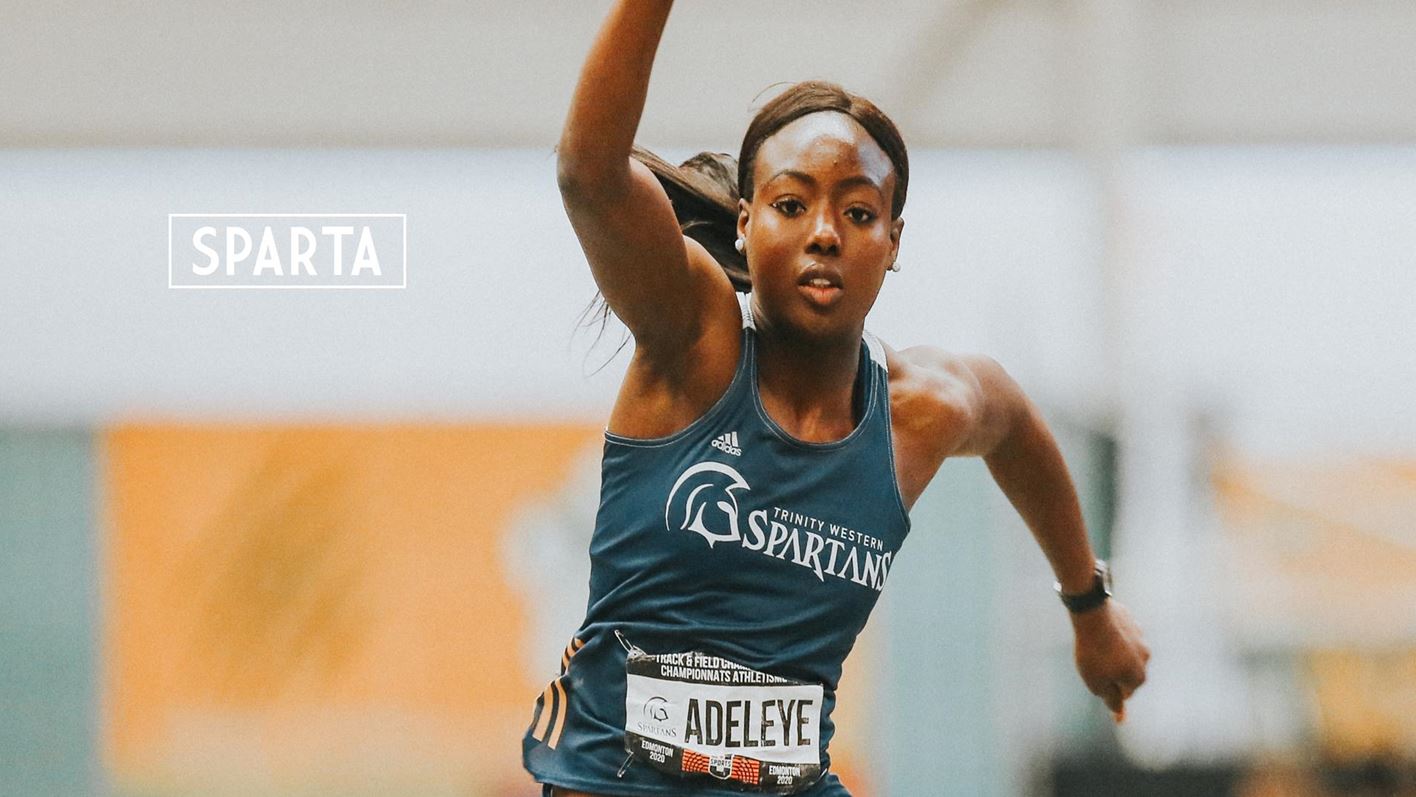 With her hands on her hips, Mowa Adeleye stands some 40 metres from the triple jump pit, staring down the runway as she readies herself for her sixth jump of the national championships.

In a moment, the Trinity Western track and field star will fly further than she ever has in her life and will do so on what will likely stand as the final jump of her competitive career. On the day, she has already achieved a one-centimetre personal best, having jumped 12.14m on her second attempt of the competition. But, as she describes, “I was hungry for more.”

The start of her fourth and final season as a Spartan hadn’t been the best. Adeleye is the first to say so.

“It was a rough season to start with. It was mentally challenging.”

Prior to the 2020 Canada West Championships, she hadn’t jumped further than 11.78m – a full 35 centimetres behind her then personal best of 12.13m.

“I wasn’t confident and wasn’t executing what we had been doing in practice.”

But in the two weeks before the conference championships, everything changed.

In many ways, Adeleye is proud of where she comes from.

While her Canadian hometown is Calgary, she was born in Lagos, Nigeria. She lived there until she was seven years old. In an instant, the music, which she listens to while warming up before a competition, brings her right back to her early days.

While the melodies foster a certain nostalgia, Adeleye is also honest about her childhood. Specific memories may be scant, but her recollections are relatively stark.

In short, “Life is a lot tougher in Nigeria.” However, upon arriving in Calgary with her family in search of a new opportunity, challenges remained. They were just different.

“I remember the transition being weird,” Adeleye says. “It was almost like I didn’t realize that I was Black until I was told by the kids that I was different. That took a while to get adjusted to.

“I was just trying to find my place and find a friend group and trying to fit in with Canadian culture,” Adeleye says. “I was a weird kid. I’m still weird. I had a lot of insecurities and was always trying to please other people and get their approval.”

The sentiment permeated her childhood. She lived entangled in a dichotomy between who she was as a person – she exudes a wildly impressive combination of a brilliant mind, an inquisitive nature, pure athleticism and otherworldly empathy – and who she was expected to be.

She was constantly curious, yet she says children who asked too many questions were uncommon in Nigerian society.

She was athletic, yet she was so much more.

“People think I don’t look like a smart person.”

Adeleye, who recently graduated with Great Distinction holding a degree in Biology and Chemistry with an eye on medical school, doesn’t fit into a box. Yet, growing up, she felt trapped inside the box she was “supposed” to reside.

“I felt that feeling of not having power,” Adeleye recalls.

“The interactions between my parents weren’t the best. As a child, I was powerless to watch what my mom has gone through in her marriage. That broke me as a child. I remember wanting to help her get through that and I remember feeling like I didn’t have a voice. I didn’t have any power in that situation.”

Her feelings of encasement have driven her motivation.

“I want to work really hard in order to tell other people that they can do anything they set their mind on. Do not let other people define and confine you. I’ve felt that. I know what it feels like to feel absolutely powerless and hopeless.”

Beyond her home, Adeleye’s success as an athlete only perpetuated a singularly-focused set of expectations.

“I had this label of being ‘the track star,” says Adeleye, who was largely a sprinter throughout high school before focusing largely on triple jump and hurdles at TWU. “I felt that I was just trying to impress people through track. It didn’t allow me to be myself and express myself, but I didn’t realize it at the time.” Adeleye wasn’t planning on coming to TWU. She wasn’t recruited by the Spartans and only happened upon the Langley-based University while searching the internet for scholarships.

She was the one to reach out to the Spartans coaching staff to see if there would be an opportunity. Two weeks before the start of classes, in the fall of 2016, she made the decision to cross the mountains and become a Spartan.

In her first year, Adeleye experienced something different.

“I think God really directed me to come to TWU,” Adeleye says. “It allowed me to discover God for myself.

“I come from a Christian background, but I hadn’t had a personal relationship with God for myself. Coming here and delving into the Word of God allowed me to realize how much freedom I have because I’m loved by God. It gave me so much freedom to know that I’m doing everything I do with the strength of God and with God at my core.”

With the Spartans track and field team, she was an instant success, winning a bronze medal in triple jump (11.77m) at the 2017 Canada West championships, bettering her Grade 12 season’s best (10.59m) by more than a metre.

“I felt so free,” says Adeleye, who competed with a ribbon in her hair that simply stated ‘For Him Alone.’ “For me the difference was, unequivocally, the chance to not have to live my life to impress other people. I only have to impress and please God.”

Her awakening was intertwined both in and outside of her sport. “It was the conversations and the people around me where I was hearing about the love of God,” she says. “I hadn’t experienced that as a child. People took the time to get to know you and they expressed that love.

“My value as a person was previously based on my result on the track. It was such a freedom. Who you are as a person is what’s important. That gives me so much freedom to enjoy the sport and do it for God’s glory and allow people to maybe even get curious about God through what I’m doing and what my teammates are doing.

“That pushes me to work really hard.”

Her ever-inquisitive mind also continued to flourish in the classroom, with her medical ambitions remaining at the forefront. Adeleye has always been a curious person. At TWU, her wonderings were encouraged.

“I think science is a really interesting reflection on God’s wonder and the intricacies within the human body and in nature. Each new answer brings a new question. I’m really captivated by it.

“I think the field of medicine provides an opportunity for us to be the hands and feet of God and to help people in their most vulnerable state, while they’re dealing with illnesses.”

In track and field, her performances continued to soar. In her second year, in the spring of 2018, she stepped up to the silver medal platform at the conference championships. Then, in 2019, under the guidance of assistant coach Sabrina Nettey, who still holds both of TWU’s triple jump (12.47m) and long jump (6.32m) records, Adeleye jumped to the top, capturing a gold medal at the Canada West championships before earning a silver medal at the U SPORTS championships.

Having coached Adeleye for the last two years of her TWU career, Nettey has witnessed Mowa being Mowa.

“The way Mowa is as an athlete is the same way she is as a person,” Nettey says. “She’s super open and wants to be the best she can possibly be and she has zero ego about it. Mowa is the best combination of amazing talent and amazing commitment. She’s a sweetheart and she always has a positive attitude.”

And…Nettey admits with a laugh…

“She asks a billion questions.”

Adeleye’s fourth and final year at was supposed to be a tidy bow on her track and field career at TWU. She set herself up to finish her biology and chemistry degree in four years and was also in a position to finish very well athletically. At least, that was the plan.

However, her 2020 track and field season didn’t start how she had imagined.

In her first three competitions before the Canada West championships, she triple jumped 10.84m, 11.78m and 11.59m.

But then, she had a moment of clarity. This is when it changed for Adeleye.

“Before Canada West, I was just like ‘Mowa, you’re not giving it all to God like you normally would.”

She put her athletic career back into God’s hands – preparing for her final conference meet with a refreshed alignment between her faith and her sport.

“That was a game-changer for me. That’s when I started to be able to calm my nerves and jump better.” On that final jump at the national championships, she took off with determination and landed confidence – posting a personal record jump of 12.39m, which was 25 centimetres better than her previous best, to win the silver medal.

“It was really cool to end that chapter in that way.”

But for Adeleye, sport was always passion and tool. It wasn’t her being.

“I’m really passionate about showing people they are loved by God and because they are loved by God, they have the freedom to be unapologetically themselves. Athletes have this stereotype that you’re not intelligent and you’re not good for anything other than your sport. I’m really passionate about breaking those stereotypes. I truly think there’s nothing you can’t do.

“Now, I’m very vocal and I’m not going to allow myself to feel powerless.”

In late August, Adeleye will take the MCAT. Amidst the COVID-19 pandemic, she has deepened her desire to serve within vulnerable and disadvantaged communities.

“I want to use that platform to inspire people. You can show love to people in all walks of life and empower them to not be confined by what society wants them to be.”

She doesn’t fit into a box.

Mowa Adeleye’s story is the eighth piece of an extensive 14-part series, detailing the people and the stories that make up Spartan Athletics.